I have relied upon Apples wireless routers since the very first Airport Base Station was released twenty years ago. I still feel that they can continue to play a decent part in my home/office network. The Airport Time Capsule ought to be ideal for cross platform file sharing between Ubuntu Linux 21.04 and macOS Big Sur on an Intel Mac Pro and an Apple Mac Mini (M1, 202 with Apple silicon. Lets find out if it can be made to work instead of buying a new expensive network connected drive. I ought to be able to do it, after all, I've been working on cross platform network products since the first one, 'TOPS for Mac' which connected Macs to each other and to DOS based PC's and Unix based Sun workstations in the 80's

Apple's Airport Time Capsule with 802.11ac was discontinued in 2018 but unusually a Firmware Update was released for it at the end of May 2019, keeping it pretty well up to date. Firmware update 7.9.1 was a security update addressing some obscure but nevertheless important issues. You can read the details over at About the security content of AirPort Base Station Firmware Update 7.9.1. Now, a firmware update for an obscure Apple product with a security issue is hardly big news, but to me it was a very welcome update as it meant that someone at Apple thought it was important enough to do and that it was still a supported device.

Apple's Airport Time Capsule with 802.11ac was expensive to buy new, at £249 (2TB) or £349 (3TB) (because it was decently specified with either a 2TB or 3TB hard drive installed. This was useful originally for over the network Time Machine backups. Nowadays all my Macs have an external Time Machine drive so this is effectively surplus. New in box Airport Time Capsules are around but expensive. You can find second hand Apple AirPort Time Capsule's at Computer Exchange (highly recommended, avoids ebay nonsense) for around £90 (2TB) and £140 (3TB)

TL:DR Apple's A1470 Airport Time Capsule with 802.11ac was great when it was launched and is still great now, provided you have a Mac or an iOS device with Airport Utility which is required to configure and manage it. Shared Hard Drive access over the network is fast and convenient for home/office networking use for macOS based computers which use AFP sharing protocols. Some limitations in security mean that although it is usable with Linux, SMB 1.0/CIFS should not be enabled on Windows based computers.

Warning! These security concerns mean you should not use SMB 1.0/CIFS at all with Microsoft Windows. See US-CERT - Microsoft SMBv1 Vulnerability

The June 2013 release of the 5th generation models featured a name change to Airport Time Capsule, and a redesign with measurements 3.85 inches (9.8 cm) square, and 6.6 inches (17 cm) high. The square dimensions echo the size of both the latest AirPort Express and Apple TVs (2nd generation onwards), just with the height being significantly higher. The 2013 models feature the same I/O ports on the back as previous generations, and come in the same capacities as the 4th generation of 2 TB and 3 TB, but have introduced the newest Wi-Fi standard 802.11ac. The new AirPort Extreme released at the same time is exactly the same in dimensions and I/O ports, just without the internal hard drive of the AirPort Time Capsule. This paragraph is from Wikipedia under the Creative Commons Attribution-ShareAlike License!

Share a USB hard disk on your network via AirPort Utility

Airport Utility has always supported sharing a USB hard disk on your network. Apple's AirPort Time Capsule contains an internal disk already which makes it heavier but more convenient. You can connect additional USB disks to the USB port on your AirPort Time Capsule too. You can connect an additional USB hard disk to the USB port on the Airport Extreme base station the procedure is the same as for the Airport Time Capsule. I'd never really bothered exploring this part of the Airport Utility, but now I am working on projects using Ubuntu Linux 21.04 as well as on two Macs running macOS Big Sur (one Intel based and one with Apple silicon), I would like to be able to easily share project files and keep one master folder for all the computers to use. 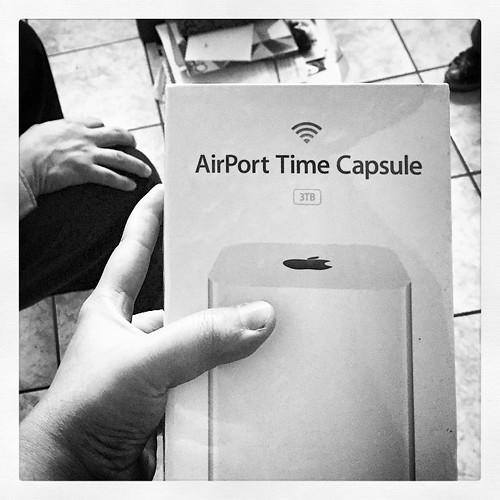 Warning! Linux moved from the default of version 1.0 of the SMB 1.0/CIFS protocol in 2017 because of widely published security issues. So really, you should only use version 1.0 like this on a LAN protected by a firewall (what used to sometimes be called a network neighbourhood). US-CERT recommends that users and administrators disable SMB 1.0/CIFS and block all versions of SMB at the network boundary by blocking TCP port 445 with related protocols on UDP ports 137-138 and TCP port 139, for all boundary devices. Of course your systems should already be well protected from malware (ideally obviously by not running Windows at all or any of the other SMB services like network browsing/listing). Time Capsule is an Apple Filing Protocol Server too, but since you cannot turn off SMB 1.0/CIFS and support for AFP and Bonjour/Zero Conf networking is 'murky' to say the least on Ubuntu 21.04 it seemed better to use SMB 1.0/CIFS File sharing.

Warning! You need to be root to do all the next steps, so remember that with great power comes great responsibility! If you arent comfortable editing config files you probably shouldnt be doing it!

noperm means “client does not do permission check”. This is required for read/write permissions from non-root linux users which is probably what you want. The two zeros stop the disk dump and file systems checks associated with local drives. sec=ntlm,vers=1.0 makes the mount command work with SMB 1.0/CIFS which is required by the Apple Airport Time Capsule. credentials=/root/pass.txt keeps the password out of your config file, by pointing mount.cifs to a file only root can read.

Make sure you get the A1470 5th generation Airport Time Capsule. Its pretty distinctive and the only one with 802.11ac networking. 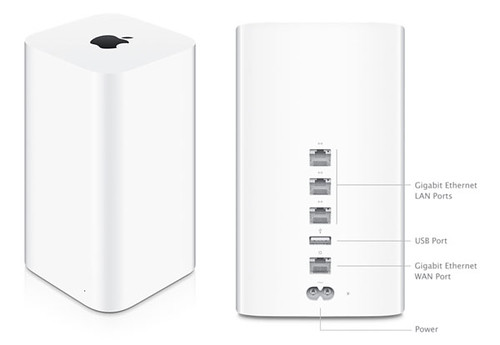 Airport Utility for iOS hasnt been updated for a year or so, but it doesnt need to be, as the product is complete and there are no new features for none are necessary.

Airport Utility for macOS is a Univeral app, provided with macOS Big Sur which means it runs on Mac computers with Apple silicon as well as Mac computers that are Intel based. Other than this, it hasnt been updated either, but again it doesnt need to be, as the product is complete and there are no new features.

The stability of Airport Time Capsules is impressive. They run 24x7 every single day with no fuss. Save for the odd power outage my 5th generation devices have been running for almost 8 years. This is especially important in a home/office network environment where if there is any wireless network downtime the IT department (me) will have to fix it double quick for the impatient end-users (my family).

Apple's A1470 Airport Time Capsule with 802.11ac was great when it was launched and is still great now, provided you have a Mac or an iOS device with Airport Utility which is required to configure and manage it. It is a home/office network swiss army knife featuring wireless access for any 802.11a/b/g/n/ac device secured with WPA/WPA2, a NAT firewall, Time-based access control, MAC address filtering (not Mac, MAC - the unique machine addresses for ethernet hardware), three Gigabit Ethernet LAN ports, a separate Gigabit Ethernet WAN port to connect to your service providers usually crappy router, and shared Hard Drive access over the network, Time Machine backup over your network, and even printing to USB printers. Shared Hard Drive access over the network is fast and convenient for home/office networking use, despite some known security limitations.

Warning! Version 1.0 of the SMB 1.0/CIFS protocol has widely published security issues. You should not use the SMB 1.0/CIFS protocol with Microsoft Windows. My view is that my limited use with Linux behind a firewall, on a home network, with no SMB 'network discovery' tools on the network to connect to an Apple Airport Time Capsule running the latest available firmware, is a low risk. Do this at your own risk.

Everything here is something we like enough to recommend!

Under £400 for the 64GB model makes this the least expensive current iPhone. The 2nd generation SE has the same processor as the iPhone 11! Also in Black and White.

The best unibody MacBook Pro Apple have ever made. Sought after by developers and power users and realistically priced these days.